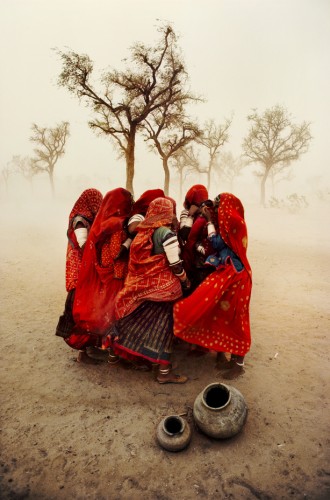 „McCurry cites this picture in the workshops he holds around the world. The lesson, he says, is this: ‚you cant get hung up on what you think your „real“ destination is. The journey is just as important.‘ McCurry made this picture while on a highway heading somewhere else in India. He had been stopped by a severe dust storm. Looking out of his car windows, he saw these road workers near Rajasthan, huddled together against the elements. ‚You have to be prepared and open to what you are seeing along the way. And then to stop and make the picture.'“ – Phaidon 55

I was in a beat-up taxi traveling through the desert to a town called Jaisalmer on the India-Pakistan border. It was in June, and as hot s the planet ever gets.The rains had failed in this part of Rajasthan for the past thirteen years. I wanted to capture something of the mood of anticipation before the monsoon. As we drove down the road, we saw a dust storm grow -a typical event before the monsoon breaks. For the miles it built into a huge frightening wall of dust, moving across the landscape like a tidal wave, eventually enveloping us like a thick fog. As it arrivied, the temperature dropped suddenly an the noise became deafening. Where we stopped, women and children worked on the road -something they are driven to do when the crops fail – now barely able to stand in the fierce wind, clustered together to shield themselves from the sand and dust. I tried to make pictures. The road workers didn’t even notice me. In the strange dark-orange light and the howling wind, battered by sand and dust, they sang and prayed. life and death seemed to hang in precarious balance. 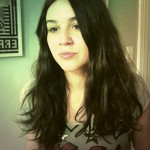