Danh Võ – As I Watch You Pulling Me Apart

If I had to choose one word I would associate with the works of Danh Võ it would have to be: beauty. I am usually surprised and always inspired by his capacity for beauty. Below, I hope to recount a few anecdotes that have brought me to understand the beauty of his work over the years I have known him.

Everything begins with language. Danh Võ claims to have actually come to art quite late and often speaks about his learning curve with regards to the language of art. His knowledge of art and thus artistic production is informed by empirical experience. While his personal biography certainly does account for a significant amount of Võ’s subject matter, it is perhaps unfair – although not without precedent – to see such a complex understanding of cultural narratives as merely symptomatic of Danh Võ’s upbringing in an immigrant family in Western Europe.

In the text entitled „Mother Tongue” published in his father, Phung Võ’s, catalogue raisonné published by the Kunsthaus Bregenz, Danh Võ writes: “Traces of the Latin Alphabet were founding an Egyptian copper mine that dates back approximately 4000 years. This discovery indicated that at the time, workers who were not able to decipher hieroglyphs invented a new phonetic writing form that was easy to read and use.”

We can draw our own conclusions here about the notion of the Symbolic in contemporary art production and the significance of language as both tool and metaphor. It is however, precisely the aforementioned ‘missing’ cultural references (or narratives) that give a structural form to the method – or language – of Võ’s production.

Everything is fair game. The so-called “Marriage Project” that began in 2003 was one of Danh Võ’s first forays in the systematic subversion of hegemonic cultural structures. Legally marrying and adopting the names of one close friend after another, this on-going work could be seen as a tribute to loyalty and love, but his subsequent accumulation of names over time calls into question the role a name plays in our understanding of identity. His passport, for example, does not read the same as his bank-card, and the name on his driver’s license is different from his door bell. Befittingly, years later, while looking for a suitable plot for his brother’s grave in a Vietnamese cemetery, Danh Võ was surprised to learn that “Vô Danh“ is literally translated as “without name”. What is in name, exactly?

In a recent project created originally for the Kunsthalle Fridericianum in Kassel, “We the People” investigates the language of liberty – by re-creating the most significant and perhaps even largest symbol of liberty: The Statue of Liberty herself. Based on the original landmark on Liberty Island in New York, Võ worked together with employees of the United States National Park Service, mobilized countless manufacturers, and pandered to museums and patrons around the globe to realize a one-to-one copy of the statue from – of course – 31 tons of copper.

The scope of such a project sounds monumental, but first with the presentation in Kassel were the project’s true dimensions palpable. The Kunsthalle was chock full of fragments of Our Lady Liberty, ranging from figurative (a finger or a toe) to ornate (the bottom of the torch), to utterly abstract (likely sections of her long, flowing robe). This vast and sprawling presentation however, represented merely one third of the statue in her entirety. Meanwhile the rest of the sculpture was in production and destined for other exhibitions at other points on the globe.

To copy the most internationally recognized and culturally potent sculpture and subsequently deny its assemblage by dispersing its fragments throughout the world can easily conjure a number of (yes, valid) metaphors. However, the undeniable (if not pure) sculptural language the manifestation of this work assumes is an interesting subversion of all the political and cultural narratives it connotes. Furthermore, the not-insignificant anecdote about this version of the statue of liberty – once created by proud (see below), French craftsmen as a gift of diplomacy for the New World – being created in a warehouse somewhere outside of Shanghai by 100 Chinese hands working around the clock for minimum wage is more than just a commentary on globalization: the project actually embodies the system that essentially enabled the larger-than-life dimensions of such an undertaking. This project, as Võ often comments in moments of exasperation, is in fact, bigger than all of us.

The terminology of pride is a slippery and often unsavory language. All too often wrapped up in nationalistic fervor, abstract value systems or other notions of better or worse, right or wrong, the notion of pride for an artist is equally as complicated. The value systems that once applied to the artisan have become a complex web of hierarchies for the contemporary artist. In terms of art production, these are treacherous waters to navigate. The pressures of an increasingly demanding art-world notwithstanding, it seems almost impossible to do without thinking – something that can became almost paralyzing.

Danh Võ insists that the only way he can curtail this is to avoid (to the best of his ability) what he calls interference: to let things happen. However vague and utopian that may sound, in its most elemental definition, production (art or otherwise) is about labor. Much of his production is in fact outsourced, managed and produced by a large (and growing) network of friends around the world with access to unbelievable pools of labor (imagine: an entire village in northern Vietnam mass producing their traditional brooms only to be shipped to Berlin via freight container to be displayed and sold in a ‘pop-up’ broom shop in West Berlin’s chic Grolmanstrasse).

With works whose scales defy most logistical expectations, it is perhaps surprising that Danh Võ’s notion of labor actually resides most centrally in a much smaller work. The work in question is a letter, written by French missionary cum saint, Théophane Vérnard, in 1861 to his father just before his decapitation. Danh Võ has commissioned his own father, Phung Võ, to copy this letter on demand for whomever will pay the nominal fee. The edition is yet undefined and on-going. Phung Võ is an impressive calligrapher – a skill he has practiced for much of his life. The letter is a beautiful piece of prose in which Vérnard bids farewell to his father and the world as he knows it. This prose, however, is written in French, and Phung Võ does not read French. His understanding of this letter is thus reduced to a series of shapes and forms, or as his son would put it: an act of pure labor.

What is perhaps even more poignant is actually the detailed archives Phung Võ keeps of his toils. Every request and payment for a letter is carefully documented; all postcards and letters of thanks are saved in chronological order of their receipt; the name and address of each recipient of the letter is dutifully logged at the bottom of a now-extensive list of collectors. While he is surely happy about the extra cash, and the writing certainly gives him something to do, it is this archive that represents a kind of pride in production toward which Danh Võ strives.

As he writes in the catalogue raisonné published by the Kunsthaus Bregenz dedicated solely to this one work: “I prefer to keep the price of the letter relatively inexpensive to ensure my father will get to work a lot. (…). I think of it as the return of an amputated alphabet. (…) My father will write this letter repeatedly until he dies.” The number of existing copies of this edition will of course remain undetermined until his death.

Death, of course, is allegory.
In his seminal publication for the exhibition Where the Lions Are at the Kunsthalle Basel in 2009, Danh Võ published an unedited excerpt of Pier Paolo Pasolini’s Heretical Empiricism, segments of which I will recall here: “I must now tell you my thoughts about death (and I leave my skeptical readers free to wonder what this has to do with cinema).  I have said frequently, and always poorly, that reality has its own language – better still, it is a language – which, to be described, requires a general semiology, which at present we do not possess, even as a notion (…).

This language – I’ve said, and always badly – coincides with human action. Man expresses himself above all through his action – not meant in a purely pragmatic way – because it is in this way that he modifies reality and leaves his spiritual imprint on it. But this action lacks unity, or meaning, as long as it remains incomplete. (…)

It is thus absolutely necessary to die, because while living we lack meaning, and the language of our lives (with which we express ourselves and to which we attribute the greatest importance) is untranslatable: a chaos of possibilities, a search for relations among discontinuous meanings.”

It is perhaps exactly this “chaos of possibilities” which constitutes Danh Võ’s fascination with allegory. His work and especially his installations most certainly embody this “search for relations among discontinuous meanings”. His exhibition at Kunsthaus Bregenz, for example, is a fantastic demonstration of the power of allegory. One more trained in art-speak might describe the installation as an ‘entangled web of references’ – but if one is able to step back from any preconceived notions of contemporary art production (or even of Danh Võ and of his production), perhaps the exhibition would just become a collection of objects (a car motor, a lock of blonde hair, a bottle of whiskey, an American flag, gold leaf, a clipping from a newspaper, a necktie). But would these objects then become any less allegorical?

I digress. The shape of Johnny Walker whiskey bottles – recognized around the world – is actually just a solution for it’s own effective distribution and export – rectangular bottles pack better into rectangular boxes. At its very core, Capitalism itself – the American Dream – is the purest of allegories. Perhaps Danh Võ’s near-obsession with the fairytale of Cinderella drives this point home most acutely. Much more than just a simple rags-to-riches story, the fairytale is best known for its gory details as told by the Brothers Grimm. With amputated toes and trimmed appendages, the lengths to which Cinderella’s evil (or just desperate?) step-sisters would go to fit into the slipper with the promise of a better (read: wealthier) life are remarkable. Danh Võ’s idea of allegory does not always align with a Walt Disney version of the story.

So what is, exactly, this preoccupation with dismemberment? A fragmented Statue of Liberty strewn across the globe; wooden sculptures of Catholic saints carefully sawed and packed into carry-on sized luggage; countless reproductions of paintings he discovered on display at the Missions Etrangères in Paris of Catholic missionaries being ‘quartered’ by jeering crowds in Vietnam.

Again, everything is fair game in Võ’s associative mapping of narratives in his almost archaeological constellations of objects. In a flurry of carefully manufactured contradictions, his installations indicate the construction of identity to be as much farce as cultural phenomenon. Dismemberment is what allows for Danh Võ to locate – for us, with us – the relations among discontinuous meanings: the montage.

And so I end – accordingly – with Pasolini: “Montage thus accomplishes for the material of film (constituted of fragments, the longest or the shortest, of as many long takes as there are subjectivities) what death accomplishes for life.” 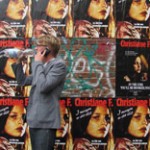 Since 2009 Scott Cameron Weaver is Assistant to the Curator Modern and Contemporary Art at the Museum of Contemporary Art (MGK), Basel. In 2011, the native American was co-curator of the exhibition based in Berlin. Scott is co-founder of the Basel art space Elaine MGK, and a variety of exhibition projects.